Facebook is a corporation in the USA – as such it has absolutely no community standards.  It only has profit motivation.  Its self congratulatory assignation to itself of having some ethics (much like around their so called fact checking which they have recently admitted is just an expression of an opinion of their fact check vendors) is a fraud.  It is a mock of the intelligence of Facebook user that they pretend to enforce some arbitrary community standards.  Most users have one time or another been exposed to ridiculous accusations over community standards.

Recently after seeing the above interesting article published by “Outrider Foundation” I put a comment under their posting and also forwarded their posted article in my feed under the same commentary.  As a take off of their headline obviously the song “If I Had a Hammer” came to mind so I quickly thought of a parody of those lyrics.  Since the “hammer” referred to in the Outsider headline is actually weaponry – I swapped Hammer in the song with the word “Bomb” resulting in:

Shortly thereafter I received a ban from posting and commenting for 4 days from Facebook.  That was over the comment in the group under their article posting.  I opposed it but did not go through the ridiculous appeal feature.  After a couple of days of returning to posting and commenting features (group ban still in place)  I am again hit with a ban, this time 6 days, for the very similar posting I made in my feed (see pictured screen shot).

After the second ban for basically the same incident, I did go through the appeal process – excerpted below.

I believe Facebook has several community standards violations queued up for me – and for many other users.  They just roll them out whenever some contract they have with some entity they are shilling for – be it national security state, Israel or some corporate interest is challenged with any level of effectiveness.

I am sharing this article and calling out the fraud of Facebook’s pretense to have any aspect of commitment to any community standards.

I am returning to my work on this FightBackBetter.com site.  The goal is to build a platform designed to meet the networking needs of those who are dedicated to system challenging struggle.  A roll out push is coming soon – I hope you become part of this exciting movement driven alternative to this wretched controlled Facebook facility.

Not expecting any favorable response – but in order to make this write up more interesting I filed the following appeal.

What I wrote is a parody of the Pete Seeger song “If I had a hammer” which is actually a song about peace and justice.

It was written IN OPPOSITION TO THE WAR AND VIOLENCE of US government and policing – not in support of any such violence – my parody was an OBVIOUS statement of opposition to war and violence.

The article that the parody was written about had this headline:

When All You Have is a Hammer…

So the reference to the song is obvious and the response using a parody of the song is legit recourse.

I have actually been ONE OF THE MAIN ORGANIZERS in NJ AGAINST US bombing and slaughter in Iraq – and against any attempt to attack Iran by the United States.

Obviously my lyrical “I’d bomb out Iran and Iraq” – is parody.

Is playing on the adage also – if all you have is a hammer – every problem looks like a nail – very appropriate.

The content was protest to OPPOSE the violence of the US government.  The support for violence is Facebook in banning this meaningful commentary – you are supporting that the opposite of what the linked article and my parody ditty is protesting.  You are preventing engagement in opposition to these policies.

Any thinking person can easily see that I am not actually calling for violence but am condemning the way that the US uses violence.

I do believe that Facebook is only using this posting as a pretense to prevent my over all commentary about a whole host of issues including the role that Facebook plays in supporting fascism. war. slaughter of Palestinians, climate destruction – obstruction to social movements.

To play dumb like you are doing – to not recognize my ditty as a parody – as a handle as a way to ban me is pretentious.

Furthermore you are already banned me for this very same act and this posting i do not even believe stayed on my timeline for 10 seconds to begin with.  It was posted to my wall immediately after i posted in the group where you came up with the first pretentious banning.

We do not have to pretend that you have community standards at all – your company serves as a vehicle taking millions from whatever bidder – Trump campaign – Biden campaign – US government – Pentagon – israel – to manipulate behaviors.  My ban is just another part of you preventing meaningful discourse on behalf of all of your mass murdering clients.

You know this and I do not expect anything will come of this appeal – it is like appealing the corrupt prosecutor’s decision to the board of corrupt prosecutors.  Some time in the future – Facebook will be severely judged by courts in nations throughout the world and subject to massive penalties and your top CEO staff will be brought up on criminal charges for the role in destruction of the planet.

This has already been answered above – yes of course – one of the most important issues – stopping US imperialist war and the resultant slaughter of millions – as well as US violent domestic policies – all of which Facebook supports 100%.

Provide a summary for your submission

Song parody was legit protest of US war and violence

As expected Facebook did not accept the appeal.  They did not even review it per their own admission.  Furthermore – they have added 29 more days but did not even provide what any new offense was. – “Content is no longer available” is what hey show.  Possibly it was just tacked on for not considering the appeal.  See new images below.

After getting out of 3rd ban over this – Facebook has now banned me a 4th time – now for posting this article – which it previously has allowed and now is determining is a reason for ban.  So you are not even allowed to talk the truth about Facebook banning process! 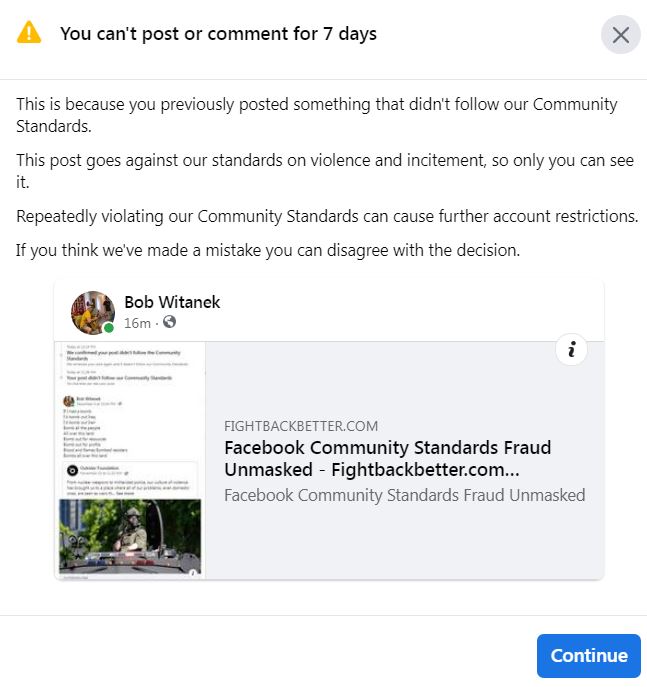 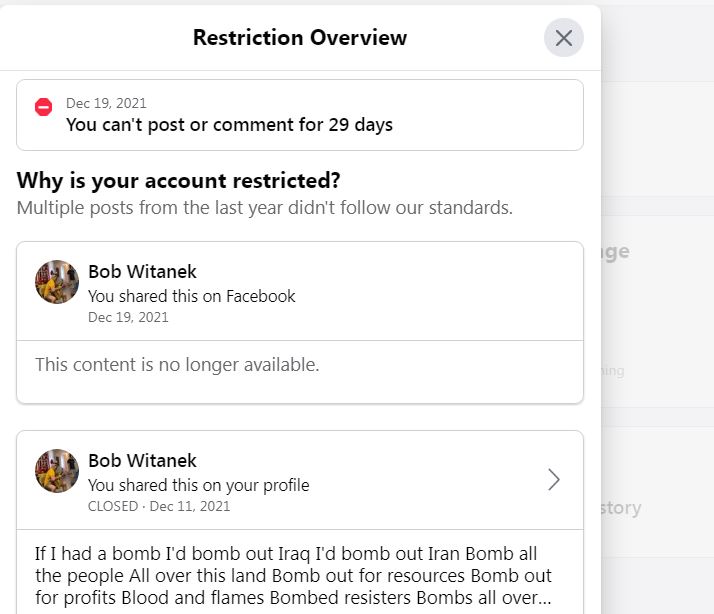 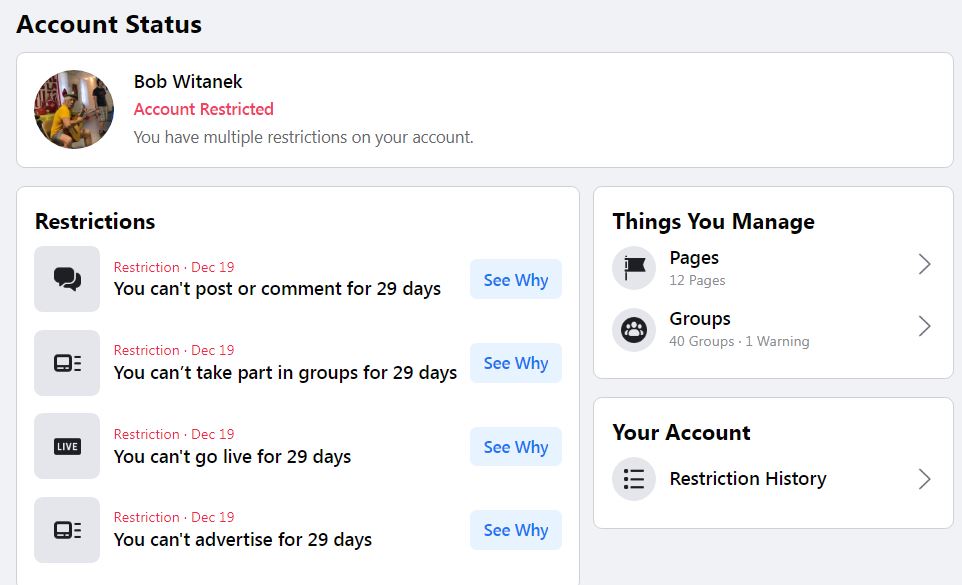 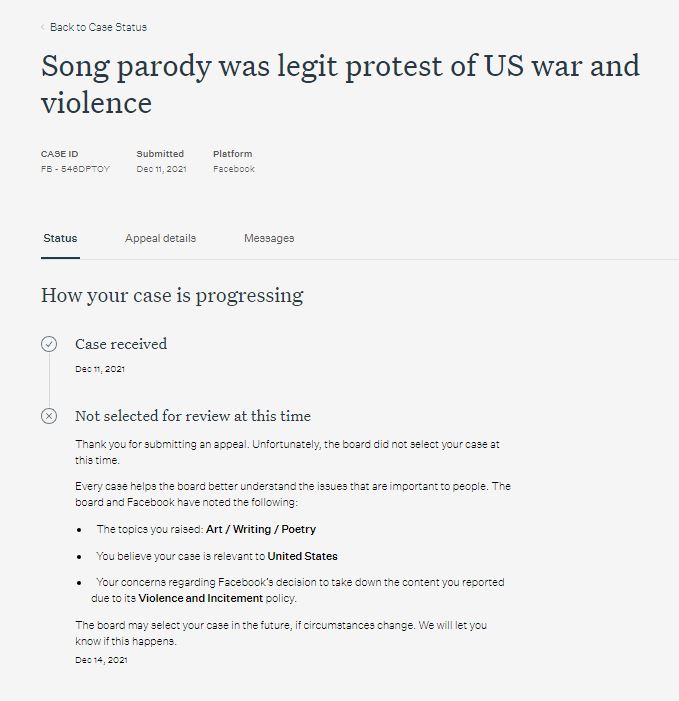