Home » Blog » Cannabis: NJ Rec Advocates, Where Is Your Heady At?

Cannabis: NJ Rec Advocates, Where Is Your Heady At? 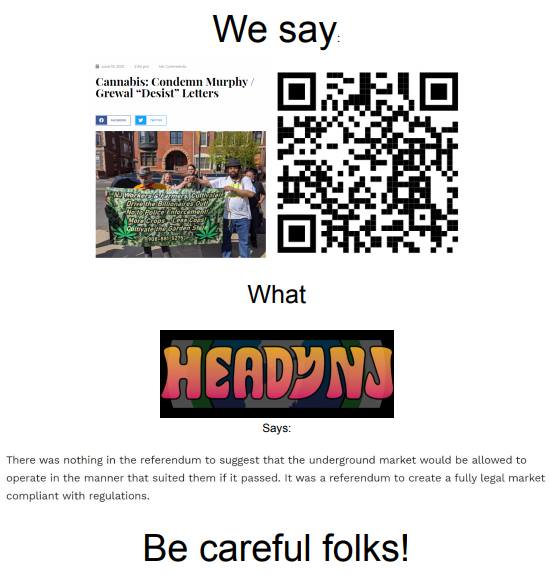 “There was nothing in the referendum to suggest that the underground market would be allowed to operate in the manner that suited them if it passed. It was a referendum to create a fully legal market compliant with regulations.”
– Heady NJ – June 17. 2021

That – unattributed insinuation of Heady’s opinion as fact was inserted into a Heady misreporting of our statement against the Desist letters.

That apparently represents the legal position that Heady NJ is taking until they clarify otherwise.

I am not sure where its members – if they recreate – get their supplies from – but obviously they are not overly concerned should the police come door kicking.

NJ is preparing a crackdown – a war on weed – – to smash the competition to the Canada and other outside investors that will reap the overwhelming portion of the revenue from NJ’s consumer and production and marketing cannabis resource.

I would suggest also that with a position as that – those companies that are currently operating outside the exclusive framework set up by those politicians favorable to these outside investors be wary if they get a call from Heady with a bunch of questions about their operations – do not think they support you because they have announced that they DO NOT!

When people voted 2:1 for legalization – the basis of that vote was NO MORE WEED CHASING BY COPS!

As far as the regulations – NJ very easily could have created a system to keep the revenue earnings IN NJ and to spread it to ALL OF THE PEOPLE in NJ who are facing homelessness, hunger, evictions and marginal existence. A little bit spread all around is much better than BILLIONS pumped into the coffers of OUTSIDE INVESTORS – ALREADY WEALTHY with NO SURVIVAL NEEDS!

They also could have regulated that those that have been in the trade get grandfathered in.

So for Heady to say – hey – you voted for regulations – nobody voted for a war on weed that is unfolding – with the DESIST letters.

Nobody voted to pump all the revenue of struggling NJ up to Canada – or that a few anointed in NJ would get cut into the lucrative game while most get subjected to arrest.

The legal argument of Heady – as much as it is against the current cannabis recreation consumers of NJ – in that they are fine and dandy with the providers getting shut down – arrested – by heavily armed SWAT teams – it is also specious because there are clear arguments that can be made to the contrary – and will be made soon probably – with the arrests already of West Winds.

And the advocacy community needs to SUPPORT the legal arguments AGAINST the crackdown and help to develop these arguments – not act like an echo chamber for the prosecutorial arguments of AG Grewal and chief Murphy – as HEADY NJ does!

Other actions against Murphy "Desist" Letters

NJ Is Coming for Your Edibles by John Lassiter

@NewJerseyOAG
#ResistTheDesist No to Murphy / Grewal crackdown – we voted 2:1 for legalization not for massive police action against it. https://t.co/mHYNL70St5

Leveraging the full potential of this proposal.

A list in formation of events around this proposal