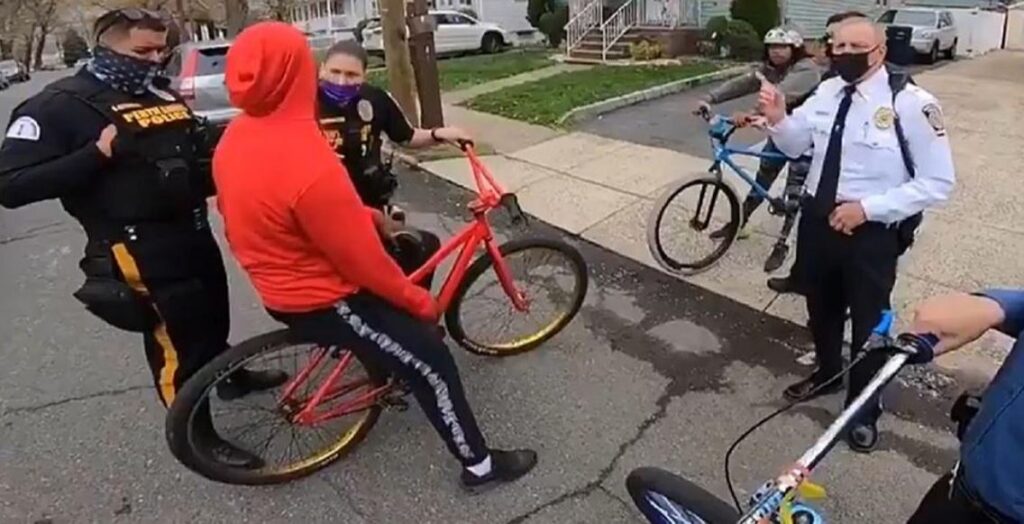 Another NJ police incident has been added to the list of 1000s where over policing, harassment, racial profiling and abuse of the population continue to raise questions about their role in communities throughout NJ and elsewhere.

As widely reported – police actually shook down youths in Perth Amboy NJ confiscating bicycles from four of them – and arresting one who protested the confiscation.

There is consideration of a proposal to respond with a call to cyclists from Perth Amboy and elsewhere to converge on Perth Amboy for possibly a couple of hours of bike riding laps around the Perth Amboy police station.

So far this proposal has been discussed positively with Kason Little, Ruben Mendez, who has grown up and continues to reside in Perth Amboy and Bob WItanek.

We would have to act quickly while there is still interest in this issue.  Also it might be best to do this on a Saturday afternoon since more people might be available and we would not be working against sunset with an evening event.  If we do move forward, we should also reach out to cyclist groups including Black cyclist groups.

If you are interested in participating or supportive and want to help with this idea – call or text 908-881-5275.

One suggestion has come in that some sort of fee be incorporated into the event to help with legal expenses and possibly bike replacement for the youth subjected to this abuse.

There also is a suggestion that the bike effort not just do laps but have feeders from various parts of the town and announce the effort in the various neighborhoods as we make our way toward convergence around the police station.

Deciide if the idea is a go and if so – what is the time and date and what is the rough outline of the planned event.

Set a goal of a minimal number of partcipants.
Engagement of Perth Amboy community
Reverse the bike confiscation poliocy, return the bikes and drop the charges on the arrested youth.

A similar protest has already occurred on April 26 and we are reaching out – or attempting to – to the organizers to see if we can do it again but bigger and more widely organized.