“Thirty years ago Russia, which more than any other country in the world given its history of invasions from those of Napoleon Bonaparte to Adolph Hitler, possessed security buffers in the other members of the Warsaw Pact and in the non-Russian republics of the Soviet Union, but now has only Belarus, South Ossetia and Abkhazia between it and NATO. If the U.S. and NATO proceed as they’re doing Russia will soon have no buffers; will be completely exposed and vulnerable. Alone with its nuclear arsenal.”

This is one of many ways that US, now with Biden at the helm,  is using military force to challenge Russia instead of having normal relations and diplomacy.  Likewise Biden is pursuing similar militarist approaches to China.  It is daunting that with the redundant ability of these 3 nations to destroy life on the planet that such hawkish policies are even fathomable.

The potential threat of US escalating toward war with Russia and / or China only further emphasizes the need to prioritize antiwar and anti-imperialist struggle to prevent such massive worldwide destruction.

This posting will be expanded with more content on the escalation of tension with Russia expected under the Biden Administration – please continue to offer links and information on organizations and actions around these issues. 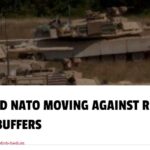 US And NATO Moving Against Russia’s Last Buffers – PopularResistance.Org