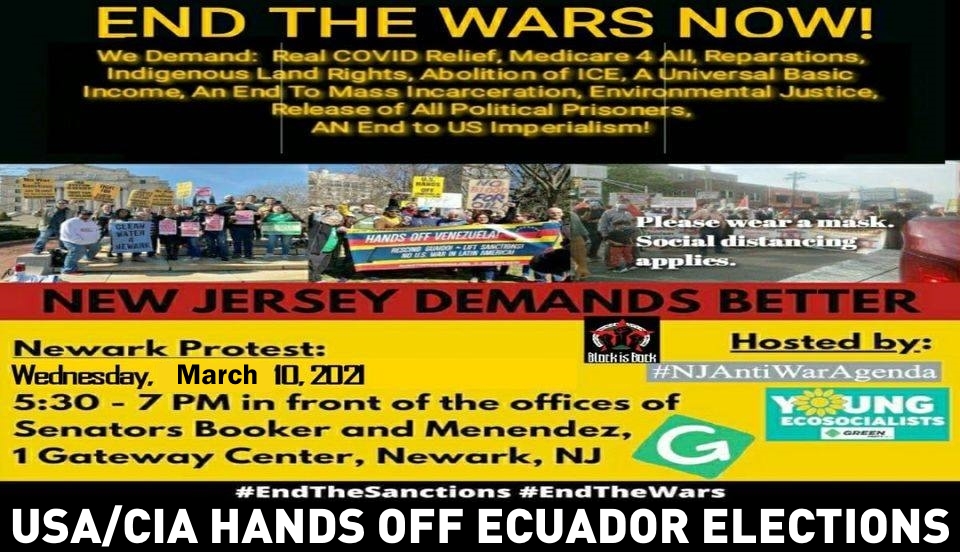 On March 10,  NJ anti-war organizers will hold the third consecutive monthly protest outside the offices of US Senators Robert Menendez and Cory Booker to demand that the US end all of its wars and bring all of the troops home.

For those who can, we encourage you to attend  – we will be addressing the usual list of wars that the US is engaged in with particular attention on demanding US Hands Off Ecuador’s elections:

As well as demanding no war and an end to sanctions on Iran:
https://fightbackbetter.c om/2021/02/04/iran

We need more organizations to join in sponsorship and we ask that sponsors minimally commit to providing at least one (more is encouraged) participant each month going forward – contact 908-881-5275 or use the form buttons below to discuss or offer such participatory support.

To build a unified periodic (monthly) protest outside the offices of US Senators Menendez and Booker at One Gateway in Newark NJ.

With the transition to the Biden Administration there is no transition to peace, an end to sanctions, support for coups, unbridled war spending.  Our goal will be to invite organizations and individuals into a unified collaborative process of building a monthly protest outside the offices of Booker and Menendez – as they also represent the Biden Administration to develop a sharpened focus on the continued war making under the incoming Biden Administration.  While opposition to war will be a primary focus we will continue also to utilize the events to connect to the many related domestic issues like the COVID-19 rip, homelessness, evictions, ICE raids and detention, need for income and other economic support during pandemic, health care etc.  We are hoping that the message gets to other folks around the country and are encouraging them too to taargetffices of war hawk politicians (like Menendez and Booker) and other war institutions for similar protests in locations around the USA.

What are the groups that we should protest and what means of invitation?  (BOB): Propose we draft a letter and that any outreach we personally do to invite participation we include the letter that describes the purpose of the event, the kinds of support needed, what participation entails, other details.

What will be the means of promotions?

What local work will we do to incorporate community?

What are the tasks that must be completed each month and how will that work get done?

How will er incorporate others into the collaborative process including the work as well as shaping of events?

Use the button below to add your group or express interest and let us know how to contact you.

For more than twenty years, the United States has been at overt war with the countries in the Middle East and parts of Africa, with the almost complete silence of U.S. citizens, especially after the invasion of Iraq on March 19, 2003.  None of these countries invaded the US, and while the mainstream media completely ignores the travesties happening in the Middle East, the devastating consequences of allowing the wars to continue are mounting.

Out of the United States’ 243 year existence, it has only been at peace for less than 20 years total since its illegal inception.   But even during those 20 years of relative peace, it was still at war with the non-white populations in this country.

This war footing of the US CANNOT continue.    Regarding the current wars that started on October 7th,  2001 in Afghanistan, the U.S.,on average, drops a bomb every 12 minutes.   And while most people are led to believe that the conflict is only with about 5 countries in the Middle East, the reality is that the US is currently engaged  in conflict with 76 countries around the world!

The estimated cost of that conflict since 2001 is 6.4 trillion dollars and counting.

It is estimated that, in Iraq, 144 babies are born with serious genital deformities for every 1000 births and the rates of such birth defects outnumber that of Hiroshima.

WIthin the first 48 hours of invading only Iraq, the US launched 800 cruise missiles and between 2002 and 2005 alone expended 6 billion bullets, which averages about 200,000- 300,000 bullets per Iraqi killed.   The so-called war on terror is not an assault on military targets, but rather a full on assault on entire populations and their environments.   Oftentimes doctors and hospitals are the targets of the assaullts.

Approximately 37,000,000 people have been displaced, creating an unprecedented refugee crisis.   This number however is a conservative estimate, and the total could be closer to 48-59 million.

There are over 800 US bases around the globe.

And yet in America on average  every minute four people are served with eviction judgements, 30 million have no access to health care, $1.5 Trillion is owed in suffocating student loan debt, and 63% of the population cannot afford a $500 emergency repair..

The issue of climate change is high on the list of many — deep cuts in the military budget would free up billions of dollars for addressing this crisis.

In addition, the U.S. needs to ratify and sign the International Treaty for the Prohibition of Nuclear Weapons which becomes international law in January 2021.

No economic or military intervention in Venezuela

Withdraw U.S. troops from Colombia and close US military bases in Colombia

Bring all troops home now from all the places in which US troops have been engaged in Combat and which have been places for drone attacks, such as   Iraq, Afghanistan, Somalia, LIbya, Mauritania,  Yemin, Syria, Cameroon, etc.   According to The Costs Of War the US Military War engagements  has grown from one country in 2001, to a staggering 80 countries globally.   We call for a withdrawal of all US military forces from all of the countries named in this report.

We call for an end to AFRICOM and for the immediate withdrawal of all US troops from the African Continent.   .For more information visit Africom Watch Bulletin 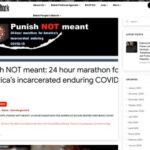 Black is Back – For Social Justice Peace and Reparations

For Social Justice Peace and Reparations 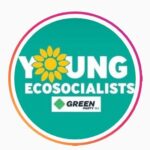 Welcome back to Instagram. Sign in to check out what your friends, family & interests have been capturing & sharing around the world. 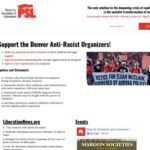 The PSL is a revolutionary Marxist party in the United States. There are really only two choices for humanity today—an increasingly destructive capitalism, or socialism.